What you should know about fibroids

A fibroid is the most common abnormal growth found inside a women’s pelvis; in fact, they occur in 20 – 30% of women over age 30. The fibroid itself is an over-growth of the smooth muscle tissue which grows in the uterine wall. Fibroids are also known as myomas from myo (muscle) and oma (new growth). A fibroid can be a small as a pea, or grow larger than a grape-fruit. Fibroids can occur as one single growth or multiple growths inside the uterus, within the walls, or the surface. 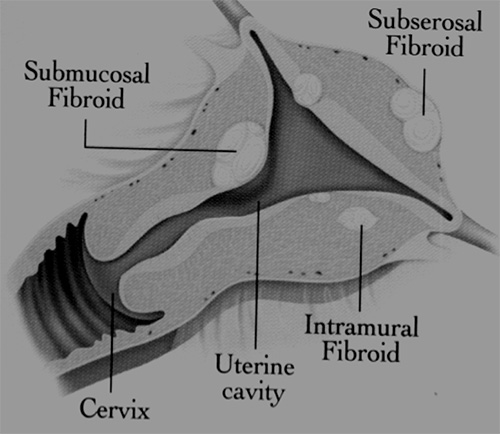 How are fibroids diagnosed?

Many fibroids can be felt during a routine pelvic examination. In order to rule out other conditions such as ovarian tumors, bowel masses or early pregnancy which can sometimes be mistaken for fibroids, there are several diagnostic tests which may be performed to determine the best treatment.

If your fibroids are small, or you don’t feel any symptoms, you may not need treatment. If you develop fibroids when you are close to menopause, your physician may wait to see if the fibroid will shrink as estrogen levels decline.

For fibroids that are large enough to cause bleeding or painful symptoms, several surgical options may be considered. Your physician will evaluate that best course of treatment based on the number of fibroids, their size and location within the uterus.

But what about medical treatment?

Is surgery my only option?

There are no drugs currently available to totally eliminate fibroids. However a class of hormones called GnRH agonists may be used to temporarily shrink fibroid size in preparation for surgery, or, to delay surgery in a patient who has menopause. Once you stop taking the medication the fibroid will usually return to pretreatment size. GnRh agonists work by decreasing estrogen levels which stop your period, and may produce symptoms experienced in menopause such as hot flashes, vaginal dryness. These symptoms are reversible once you stop taking the drugs.

What are surgical options?

Myomectomy is usually performed using a general anaesthetic because the cervix must be stretched or dilated to accommodate the size of the hysteroscope. The two major advantages of “resection” compared to open myomectomy are minimizing blood loss and preventing surgically induced adhesions (scar tissue) that may impair future fertility. In most cases you can return to normal activity within a few days of the procedure.

Can fibroids cause infertility?

The medical literature reports that between 2-10% of fertility problems can be caused by fibroids which can block the fallopian tubes or prevent implantation.